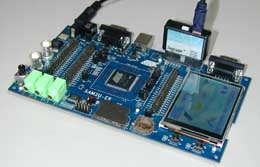 The enhancements to Crossware’s ARM Suite allow developers to rapidly exploit the advanced features of this chip family by providing a combination of wizards, simulation, debugging, compiler extensions and pre-configuration. This allows the developer to immediately take advantage of Crossware’s advanced C/C++ compiler and other tool chain components and simplifies the otherwise complex task of setting up a SAM3U chip. This helps accelerate the development process and significantly reduces new product time-to-market.

Crossware’s Code Creation Wizards are provided for all the SAM3U on-chip peripherals and many are able to generate configuration code and outline interrupt handlers. The simulator simulates the Cortex-M3 core itself and the nested vectored interrupt controller (NVIC) as well as many of the SAM3U on-chip peripherals. This allows a developer to use the simulator to immediately test the code created by the wizards. The simulator can also be extended using the Crossware Virtual Workshop Interface allowing developers to construct a simulation of their complete target system.

The Crossware Jaguar USB JTAG interface facilitates on-chip debugging. This connects to the standard ARM 20-pin JTAG connector allowing the Crossware source level debugger to drive the on-chip ARM Serial Wire/JTAG CoreSight debug port. Firmware specific to the SAM3U will be automatically downloaded to Jaguar when the developer switches to debugging a SAM3U based target board.

With its advanced C/C++ compiler, libraries, wizards, simulator and debugger, the Crossware ARM Development Suite - which runs on 32-bit Windows and 64-bit Windows 7 - provides a complete and extremely user friendly development environment for the ARM family of microprocessor cores.