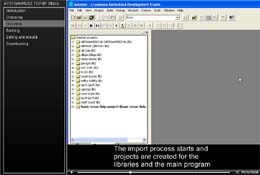 These enhancements are made possible by Crossware extending its Workspace Creation Technology, developed originally for the ColdFire MCF5249, to support the wide range of applications examples (Softpacks) available from Atmel to support developers using its SAM7 and SAM9 ARM-based microcontrollers.

Alan Harry, Crossware’s CEO, said: "As a result of the built-in intelligence within our Workspace Creation Technology, application developers using the Atmel AT91SAM Softpacks can now have their applications up and running in minutes - rather than hours, days or weeks - by simply using our enhanced ARM Development Suite."

A wide range of application examples have been developed by Atmel to demonstrate the features of its SAM7 and SAM9 ARM-based microcontrollers. These are available as Softpacks with each Softpack containing a range of examples for a specific SAM7 or SAM9 variant. Unzipping an application from a Softpack creates a complex set of sub-directories containing a makefile, source code for the application, source code to configure and drive the on-chip peripherals, linker scripts for the different build configurations and so on.

The Crossware ARM suite is able to completely import such an application and arrange it as a set of libraries and a main application. The application can then be immediately built and run on the appropriate Atmel evaluation board. This gives the developer user friendly access to a wide range of pre-written programs.

One such application is lwIP (lightweight IP), the TCP/IP stack developed by the Swedish Institute of Computer Science. A version of the stack is available for Atmel’s AT91SAM9263 evaluation board. Once the application is unzipped, it takes about 30 seconds for the import process to complete, 50 seconds to build the 15 libraries created, and 5 seconds to build and link the final application.

The Crossware Workspace Creation Technology will have automatically created a download script to configure the SDRAM of the AT91SAM9263-EK and so the download process, which takes less than 10 seconds using the Jaguar USB JTAG debugger interface, can commence immediately. It is therefore possible to have an example web server application running on the AT91SAM9263-EK within 2 minutes of it being unzipped.